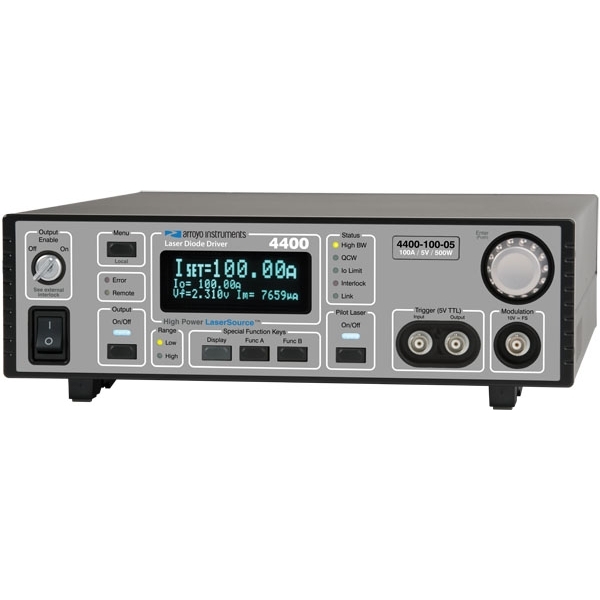 We are the distributors of Arroyo Instruments in Portugal and Spain

These drivers have a USB2.0 control interface (all models) and RS232 (4300 series and higher) and control software and have the features expected from any driver, such as safety interlock, ESD protection and current limiting circuits and voltage.

But in addition the LaserSource range has unique characteristics  that are not found in competing driver products such as
- optically isolated photodiode and modulation inputs (avoid "ground loops")
- programmable PD bias
- constant voltage control mode
- Dual current range: improves noise and accuracy in the low current range (half the total) while reaching high currents

The three series of the ARR-LaserSource range are:
- ARR-4200-DR: dual range up to 2A and 10V. This allows the flexibility of two instruments in one: select the lower range (mid-range) for low currents and you will have greater precision and stability and less noise; select the top for high power devices
- ARR-4300: for medium and high powers, such as pump lasers, open beam lasers and high power devices connected to fiber. It also has RS-232 interface and the quasi-continuous mode option (QCW), which allows the diode to operate at low duty cycle, thus mitigating the thermal load, and makes it possible to work at higher optical powers than those obtained in CW mode.
- ARR-4400: for high powers, available with up to 100A and 56V, and with QCW option

If you work with laser diodes you might also be interested in:
- laser safety eyewear
- power and energy sensors and meters
- laser beam profile analyzers

Be the first to write your review !