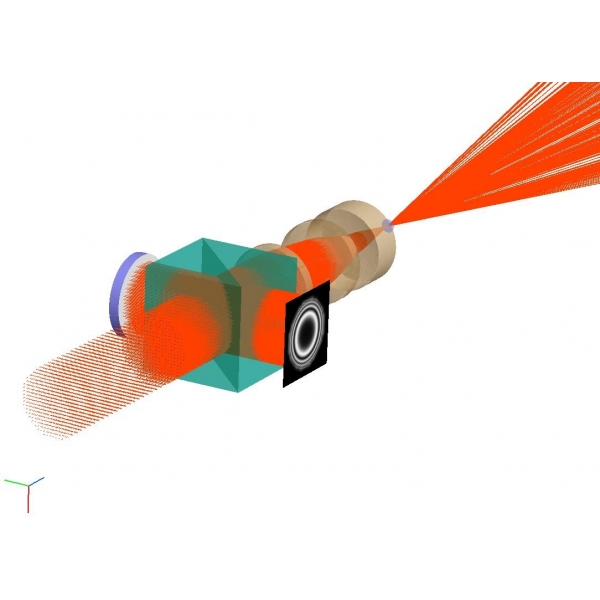 The FREDmpc optical engineering software increases the calculation speed orders of magnitude compared to other systems and programs.
The use of GPU hardware allows ultra-fast processing speed to our optical design and simulation software.

FREDmpc is a version of Photon Engineering’s FRED Optical Engineering Software package that allows ray generation, ray tracing and analyses to be performed with GPUs, thus improving the processing speed in orders of magnitude.
This is the result of our continued investment in leveraging cutting-edge technology for ultra fast, radiometrically precise optomechanical raytracing and analysis.

GPU hardware technology, of which NVIDIA is an industry leader, allows for thousands of processing units running in parallel to be contained within a single workstation. GPU hardware (and software) is rapidly advancing, is highly scalable, and has a relatively low entry cost when compared to distributable CPU based networks. By simply adding, or upgrading, the GPU board in a PC, raytracing and analyses with FREDmpc can be performed orders of magnitude faster using GPUs than with conventional multi-threaded CPUs.

FREDmpc is not a standalone product, it is an extension to the existing capabilities of FRED and FRED Optimum. This includes the fueatures of FRED Optimum plus:
- Up to 150x faster raytracing
- GPU-enabled massively parallel computing
- Linear scaling with number of GPUs
- Distributed computing with GPU raytracing and analyses
- 3D scene raytrace rendering

All of FRED’s modeling, raytrace and analyses capabilities can be applied in the usual manner with the addition that raytracing and analyses can optionally be performed on the GPUs upon request. How does FREDmpc work?
From a program structure perspective, features in FRED which are supported on the GPUs have two implementations in the source code base; one version written specifically for CPUs and one version written specifically for GPUs. When a request to use the GPUs is made, the FRED model on the CPU is passed through a translator that maps each supported FRED feature into its equivalent GPU version.  As Photon Engineering continues to invest in GPU code development, the capabilities of FREDmpc will expand with each new release.

Be the first to write your review !